“Wrong does not cease to be wrong because the majority share in it.”

When I watch the news or read the paper, I think I can be forgiven for becoming somewhat distraught. The world is in such a fragile, sad place at the moment.  And after discussing this with my sister Karin, we both agreed that being “sensitive” women, open to the energy of the world around us, can be heart-breaking.  What are we doing to this planet? What are we doing to one another? Why is this happening?

And going a step further, what can we do about it?  On a large scale, it feels as though one small, insignificant person can do very little.  It all feels too big.  But that feels ‘wrong’ – I have to do something, even on a small scale.  One thing that may not seem significant on the bigger scale, but I feel is very significant, is too keep “cleaning up my side of the street.”  To stay clear and communicate through my own trials and tribulations to come out the other side.  I had a confrontation with a good friend.  It felt awkward and hard and it brought up a lot of old stuff for me, old childhood shame and feelings of being ‘wrong’ and bad.  My immediate instinct was to lash out at her, but I knew after years of therapy and my own work, that that was ‘wrong’. So luckily, this friend has also done a lot of her own work, so we talked, we communicated through it.  It was not easy or comfortable or fun, but it worked.  We worked through it, dug below the incident to what it brought up, in both of us, and got through it.  I still have some work to do around my own behaviour, but the communication through the difficulty, shattered the small prison of shame that I was sitting in.

This one small incident may not seem significant, and maybe it’s not, in the big picture.  But it was huge for me for a couple of days. And no I’m not saying that if we could all communicate better then everything would be peachy keen, but on a smaller scale, if people communicated better with each other, and were willing to be real with one another, I think the world would be in a lot healthier state.  But then again, I always have been accused of being a Pollyanna.

The short clip I want to close with may not seem to fit with this post, but I feel like it does, and I really liked it.  A short TED talk about Philosophy in Prison. I enjoyed the construct of ‘wrong’ – and more importantly it reminded me of my son Lukas who is studying PPE (Philosopy, Politics and Economics) and who has been away in Edinburgh studying for the past 10 months, and I miss him terribly.  So when I saw this clip, and I thought of Lukas, I smiled. So I wanted to include it here. After all in this very small universe that is my blog, I get to make the rules!

“The great thing about being the only species that makes a distinction between right and wrong is that we can make up the rules for ourselves as we go along.”
― Douglas Adams

I’d love to hear from you about how you handle ‘wrong’ in your life.  And as always, thank you for taking the time to visit.  I appreciate it.

“Whatever Can Go Right, Will Go Right, and at the Perfect Time.”

Home again.  So happy to be home.  Feeling grateful for my home and my life.

So many wonderful stories about Borneo and Bali which will no doubt feature in my posts for months to come.  But today, I want to write my first post of 2013 about Clark’s Law:

Whatever Can Go Right, Will Go Right, and at the Perfect Time.

My sister Karin and I coined this Law (thus Clark’s Law!) on the way to the airport as she and my niece Chelsea were leaving Borneo.  We had just had an amazing 3 days, where everything that could go right, did.  We saw majestic orangutans (after being told we probably wouldn’t see them as it was durian season and they would be out in the jungle and not interested in coming to feed at The Semenggoh Wildlife Centre.)  We hiked and saw beautiful caves and waterfalls, and had a fabulous day at Bako seeing troups of proboscus monkeys, even though it was rainy season and many people told us we would probably get rained out from most of these adventures.  But everything just kept going right!

This was after ten magically wonderful days in Bali!  Ten Days of feeling the spirit and peace that is Bali. Staying at lovely hotels, swimming in luxurious pools, eating delicious food and meeting wonderful people.  Having fun with my sister, and my niece and my son – laughing, exploring, playing cards, enjoying our time together. Not to mention our magnificent massage and facials at De Nyuh Spa.  Bliss!

On the way to the airport, Karin and I marvelled at our good fortune, feeling incredibly blessed and grateful.  And we both commented that 2013 felt like it was already tremendously positive and powerful.  We had set clear intentions of what we wanted from our trip together and everything aligned into place perfectly.

2013 feels like it is going to be an amazing year!

I am going to end this post with an interesting and insightful video by Mallika Chopra, Deepak Chopra’s daughter, on the subject of intention. She remembers growing up and saying this every night before going to bed:

“I am responsible for what I see, I choose the feelings I experience and set the goals that I will achieve; and everything that seems to happen to me, I ask for and receive as I have asked.”

Please let me know about your intentions for 2013.  And as always, thank you for stopping by, I appreciate it.

“When the student is ready, the teacher will appear.”

“Our bodies communicate to us clearly and specifically, if we are willing to listen to them.”

When I first read that statement by Shakti Gawain, I felt a tingle inside, and luckily for me, I finally listened.  I was finally ready to make some changes in my life.  If I had read Shakti Gawain’s timeless book, Creative Visualization a year earlier, it probably wouldn’t have moved me in the same way.

But because of where I was in my life, as I read her book, I felt the shift, I had the Ah-Ha Moment that I had heard others talk about.  I credit Shakti Gawain with waking me up, with being my teacher when I was finally ready.

Although actually, to back up a step, I would say that my sister Karin Clark would have been my real first teacher.  She saw in me my search for meaning, my longing for something more.  She saw that alcohol and partying was not only no longer enough to make me happy, but was actually beginning to destroy me.  It was my sister Karin who gave me that book, and who was and continues to be my teacher. I have never formally thanked her, so I want to do that now.  Thank you Karin, from the bottom of my heart.  In more ways than one, you saved my life.  I love you.

Who was your first teacher?  When did you have that Ah-Ha Moment?

The video below is an excerpt from an interview with Shakti Gawain about the process of creative visualization.

Please let me know what you thought of Shakti Gawain’s interview.  And I’d love to hear about how you found your own teacher.

As always thank you for taking the time to visit, I appreciate it.

THIS WAY UP: Seven Tools for Unleashing Your Creative Self and Transforming Your Life 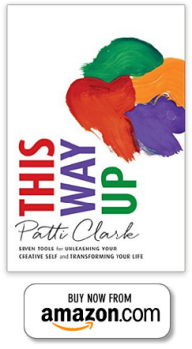 April 2016 from She Writes Press